Art in the Comfort Zone? The 2000s in Estonian Art

The exhibition Art in the Comfort Zone? The 2000s in Estonian Art continues the series of exhibitions at the Kumu Art Museum dedicated to contemporary art which started with the project The X-files [Registry of the Nineties] in 2018 (curated by Eha Komissarov and Anders Härm). The current exhibition, based primarily on the contemporary art collections of the Art Museum of Estonia and the Tartu Art Museum, offers insights into the art of the noughties; it also sheds light on some less widely known works and ideas that were fully manifested only in the teens. The display is laid out in the form of dialogues between different topics, keywords and motifs, with the purpose of conveying the sensibilities, artists’ positions and viewpoints characteristic of the art of the decade.

On the broadest social and political plane, this was the decade that greatly shaped the world we are living in now. Neoliberalism, the rise of China, ultrafast developments in (digital) technologies and an altered media sphere ‒ all of these keywords describe processes that started or intensified in the noughties and continue to be of consequence today. Considering all of the above, what can we say about the art of the noughties? The decade that was ushered in by a hangover of the tumultuous art life of the nineties and that ended with a truly varied art scene is not easily defined and it’s difficult to find a common denominator. The art of the noughties evolved in every possible direction, in content as well as form and, although it largely elaborated on the topics and developments of the previous decade, it manifested a different sensibility, which is what the works selected for this exhibition highlight.

The above-mentioned new sensibility or approach is mostly attributed to the young artists who entered the art scene in the 2000s: several artists who have now reached the peaks of their creative careers emerged in the noughties with powerful debuts and a new type of artist’s position. Young artists who no longer regarded the radical quality of the previous decade as a value brought new topics and a new vocabulary into art, including the techniques of relational aesthetics, queer art and the concept of art as a form of research. In hindsight, the fundamental changes of the decade were not elicited solely by the young who began their art studies in the early 2000s, but the developments that defined the decade were triggered by their dialogue with the 1990s generation, many of whom were in their absolute creative prime at the time, shaping the art scene with their solo works, as well as through tutoring.

The Magazine accompanying the exhibitions is primarily work- and artist-centered, introducing a large number of authors who have joined art life at zero and looking at the work of artists who started in the 1990s a decade later.

Book a tour for the temporary exhibition.

Book a tour for the temporary exhibition. 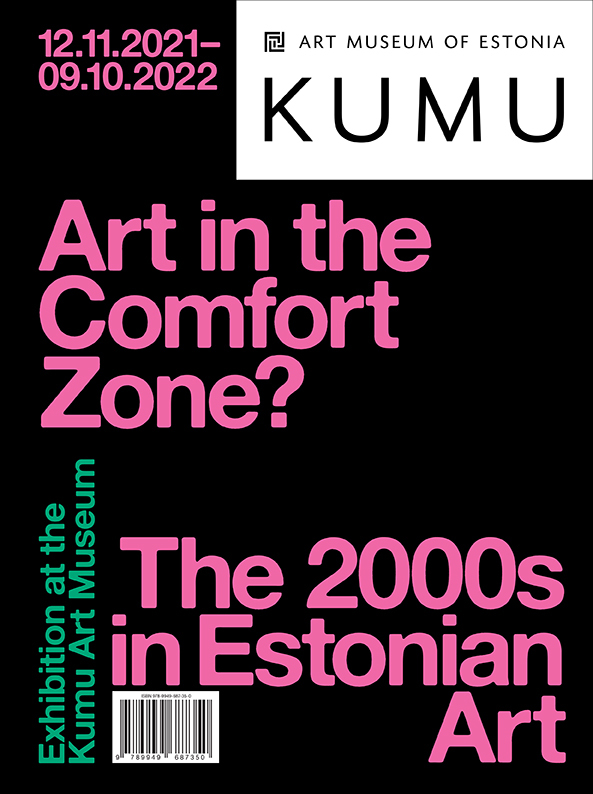 Exhibition’s magazine “Art in the Comfort Zone? The 2000s in Estonian Art”
7 €